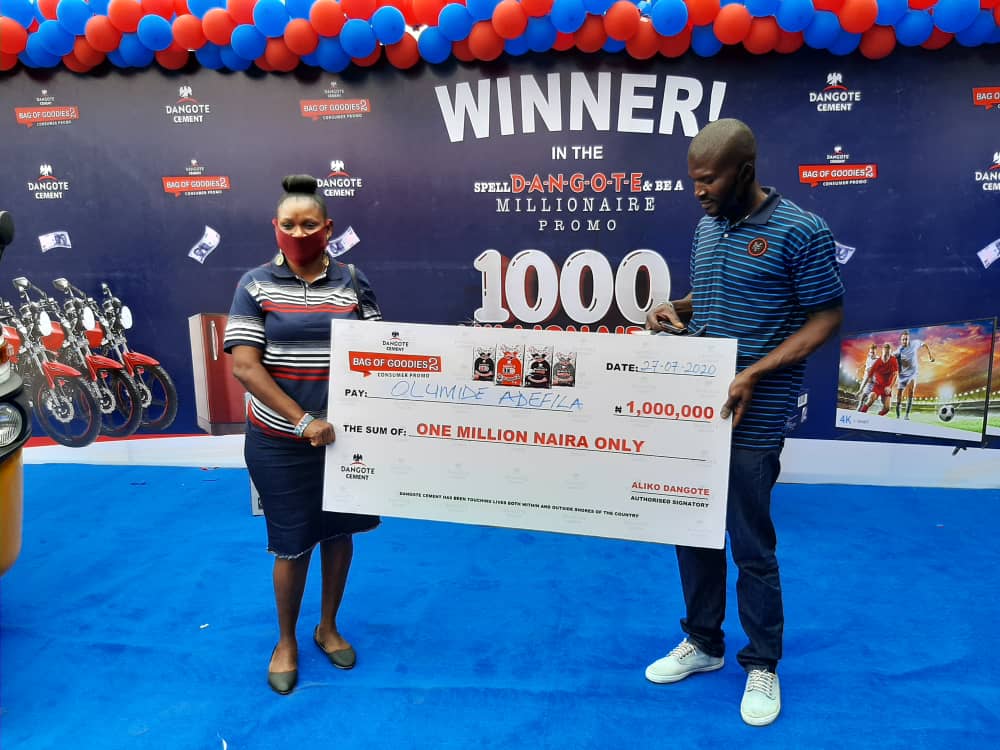 Dangote Cement on Monday announced winners of ongoing Dangote Cement Bag of Goodies Season 2 Consumer Promo, with two Block makers from Lagos and Oyo States emerged first-star prize winners of N1 million each.
In a statement, the cement firm majorly owned by Africa’s richest man, Aliko Dangote said the promo was partly to reward loyal customers and ameliorate the impact of COVID-19 pandemic on consumers.
The statement said winners are cash prize apart from other commercial and household items while the promot is expected to run from July 15 to November 15, 2020.
A block maker based in Lanlate, in Ibarapa East local government area of Oyo State, Ojediran Kayode Stephen, who emerged the first N1 million winner in the “Spell Dangote and be a millionaire” promo, said he got the winning letters from among the 500 hundred bags of cement, which he bought to make blocks for customers.
Apart from the N1 million, Ojediran said that he also won several recharge cards and extra N2000 in the promo.
On what he would do with his winnings, he explained that he is going to invest the N1 million to expand his block making business.
“I am very happy for becoming one of the first sets of people to win in the Dangote Cement Promo. I intend to use the money to expand my business. I am going to buy more bags of cement to produce more blocks.
“I thank Dangote Cement company for organizing this promo in this era of COVID-19 and I believe the money will go a long way to reduce the pain of the pandemic in the country”, Ojediran was quoted by the statement.
Another lucky winner, the Managing Director of Afolabi Adefila Block Industry, said that he has been a user of Dangote Cement since the inception of his business, which he started several years ago.
According to him, he buys over 300 bags of Dangote Cement weekly for his block factory located in Lagos. “I patronize only Dangote Cement. This money is timely, most especially during this era of COVID-19. Dangote has been doing a lot to ameliorate the challenges of COVID-19 on Nigeria. I am aware of what the company has been doing to reduce hardship in Nigeria.
The promo is just an added effort to what Dangote has already done in terms of poverty alleviation”, he said.
Marketing Director of Dangote Cement, Funmi Sanni had during the launching of the promo in Lagos explained the Spell and Win promo is expected to produce 1,000 millionaires within 16 weeks while many consumers also stand a chance to win tricycles, motorcycle, television sets, refrigerators, Dangote Food Goodies packs, recharge cards and many other exciting gifts.
To be a part of the promotion, she explained, “all the consumer needs to do is to buy any promo bag of Dangote Cement during promo period, pick out the scratch card inserted in the bag, scratch open the inserted card to see what you have won, go to the nearest redemption center to collect your prize. To win a million naira, the consumer is expected to collect cards to spell, D-A-N-G-O-T-E and win star prize of N1million”, the company disclosed.

Nigeria is committed to boost investment in digital economy ~VP