Nearly a decade after Nelson Mandela and anti-poverty activists Bono and Bob Geldof persuaded the rich world to forgive Africa’s crushing debts, many countries’ debt levels are creeping up again, which could undermine the region’s growth boom.
As African states line up to join the growing club of dollar bond issuers, economists and analysts warn of a slide back into indebtedness that could undo recent economic gains and create a “Eurobond curse” to match the distorting “resource curse”.
“Eurobonds have become like stock exchanges, private jets and presidential palaces. Every African leader wants to have one,” said one investor, asking not to be named.
In 2007, Ghana became the first African beneficiary of debt relief to tap international capital markets, issuing a $750 million 10-year Eurobond. Since then, previously debt-burdened countries, such as Senegal, Nigeria, Zambia and Rwanda, have also put their names on the list of bond issuers.
Governments seeking to replace declining foreign aid and pay for infrastructure are also taking concessional funds from multilateral institutions, more expensive commercial bank loans and bilateral financing from lenders like China and Brazil.
No Sub-Saharan countries are in immediate danger of default and most are largely financing themselves domestically, but the debt build-up is stirring up troubling memories of the past.
“The financial sector loves to find people to prey on and their most recent prey are governments in developing countries,” Nobel prize-winning economist Joseph Stiglitz told Reuters in an interview during a conference in Johannesburg this month.
“They get over indebted, they get a bailout from the World Bank and IMF and they start over again. I think it’s unconscionable, but their memory is short and their greed is large, so it’s going to happen again.”
Up to 30 low-income sub-Saharan African countries had their debts reduced under the IMF and World Bank’s Highly Indebted Poor Countries (HIPC) initiative, which was later supplemented by the Multilateral Debt Relief Initiative (MDRI).
An estimated $100 billion of debt was wiped out, easing countries’ onerous debt burdens, often the result of loans taken on by corrupt regimes. These had meant more being spent on debt service payments than on health and education combined.
RISK OF OVER-BORROWING 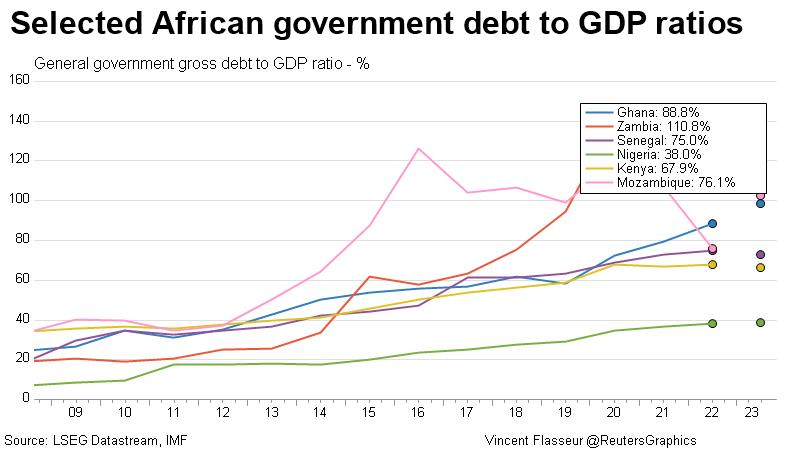 Although debt sustainability in Africa has improved since the debt relief initiative, a forthcoming World Bank paper warns of a risk of over-borrowing, especially by countries expecting new revenues from resource discoveries. One of the co-authors of the study shared its findings with Reuters.
In Ghana, Uganda, Mozambique, Senegal, Niger, Malawi, Benin and Sao Tome and Principe, debt levels are creeping back up. If all continue to borrow and grow at current rates their debt indicators could be back to pre-relief levels within a decade.
Others with rapidly rising debt ratios include Ethiopia, Tanzania and Burkina Faso.
Nevertheless, the study finds that on average there has only been a modest rise in debt-to-GDP ratios in nearly a decade.
In the 26 African HIPC beneficiaries studied, nominal public debt fell from a GDP-weighted average of 104 percent of GDP before relief, to 27 percent by 2006 when most had received full debt relief. Half a decade later the ratio was at 34 percent.
The trend has been broadly the same for resource-rich and resource-poor, and high- and low-income economies, said Mark Roland Thomas, a World Bank manager and co-author of the paper, the first review of debt dynamics in Africa since debt relief.
Ghana, which sold a new $750 million Eurobond and bought back a portion of the 2017 issue last year, shows how growing debt levels can threaten countries’ fiscal dynamics.
Ghana’s stability and roaring economic growth, reaching 14.5 percent in 2011, have made it an investor favourite. But the government’s inability to tame widening fiscal deficits has led to a deterioration in its debt ratios. Its debt now represents just over half of its GDP, from 32 percent in 2008.
An expanding current account gap has hit the cedi currency, which has weakened more than 9 percent against the dollar this year, after a 24 percent slide in 2013. Fitch downgraded the cocoa, gold and oil producer to B from B-plus last October.
In a sign of waning market confidence, yields on Ghana’s sovereign debt are higher than for any other African country with an actively traded international bond, at around 9 percent for its 2023 Eurobond and over 20 percent for domestic debt.
Zambia’s story is in some ways a slow-motion version of Ghana’s. Africa’s biggest copper producer, which sold a hugely oversubscribed debut $750 million Eurobond in 2012 and plans to return to the market, was also downgraded by Fitch last year.
Zambia’s debt is around 30 percent of GDP, still quite low. The government needs to spend on roads and energy but economists worry its current pace of borrowing cannot be sustained.
“EUROBOND CURSE”?
For Michael Cirami, an emerging markets fund manager at Eaton Vance Corp, Ghana and Zambia challenge the notion that sustained growth is a given for African nations. While international bonds bring countries into the global financial market and scrutiny from investors can improve policymaking, there may also be a flipside of looser fiscal policy, he said.
“I wonder and sometimes fear about a Eurobond curse, particularly in sub-Saharan Africa, where all of a sudden you get what seems like a windfall of money and you end up with policymaking deteriorating,” he said.
Ghana’s GDP will likely only grow by 4.8 percent in 2014, the IMF says, from 5.5 percent last year. The market has less faith than the government that future growth will be enough to repay debtors, said Antoon de Klerk, a fund manager at Investec.
“If Ghana’s growth falls short of expectations, it will very quickly run into debt servicing problems,” de Klerk wrote in a note to clients.
Ghana’s finance ministry declined comment for this story.
In Zambia, ministry of finance permanent secretary Felix Nkulukusa told Reuters that concessional financing from the IMF and World Bank was insufficient to fund big infrastructure projects, forcing the country to turn to private creditors.
“The pace of borrowing is sustainable because we are not going to be borrowing forever,” he said.
The World Bank and IMF say Ghana and Zambia’s debt is sustainable at current levels but Ghana is vulnerable to shocks.
TOUGHER QUESTIONS
Despite misgivings about certain countries, Africa is still in a fundamentally different place than it was 20 or 30 years ago when the old debts were taken on, thanks to robust growth and better public sector management, said Todd Moss, a senior fellow at the Washington-based Center for Global Development.
Borrowing from private creditors also puts a higher burden on leaders to be responsible, Moss said, “whereas borrowing from the World Bank, there’s clearly a dynamic of lend and forgive.”
The challenge for governments will be to ensure that borrowed funds are invested wisely and not mismanaged.
Eurobonds may also be a short-term funding solution for Africa as tapering of the U.S. Federal Reserve’s bond-buying stimulus ends an era of low interest rates in the rich world that sent investors rushing to higher-yielding emerging markets.
Investors will do more homework on issuers’ fundamentals than in the past and ask tougher questions about use of funds, bankers say. A key test will be if infrastructure investments generate returns that enable governments to service their debts.
Nick Dearden, director of the World Development Movement, says governments should use borrowed funds to reduce commodity dependency, still a widespread problem for Africa.
“Getting more minerals out of the ground may be very beneficial for Western nations … but if it’s not developing African economies in a genuine way they’re likely to be left with the debt and none of the resources they’ve invested in.”